"if you are not living on the edge, you are taking up too much room"

life in the oil patch

Yep Gang we are still here, workin away in the oil fields. :-)
Our days so far have been pretty predictable. Rudee normally relieves me around 8 am and I go to bed shortly afterwards. I'm usually up by 4 pm and we share the gate duties until after dark when I take over completely and She turns in around 10 pm. We have had some busier days but mostly things have been pretty laid back. I have even been able to catch a nap for an hour or two each night. As I said before our pad is pretty cozy and we are pretty close to the rig. 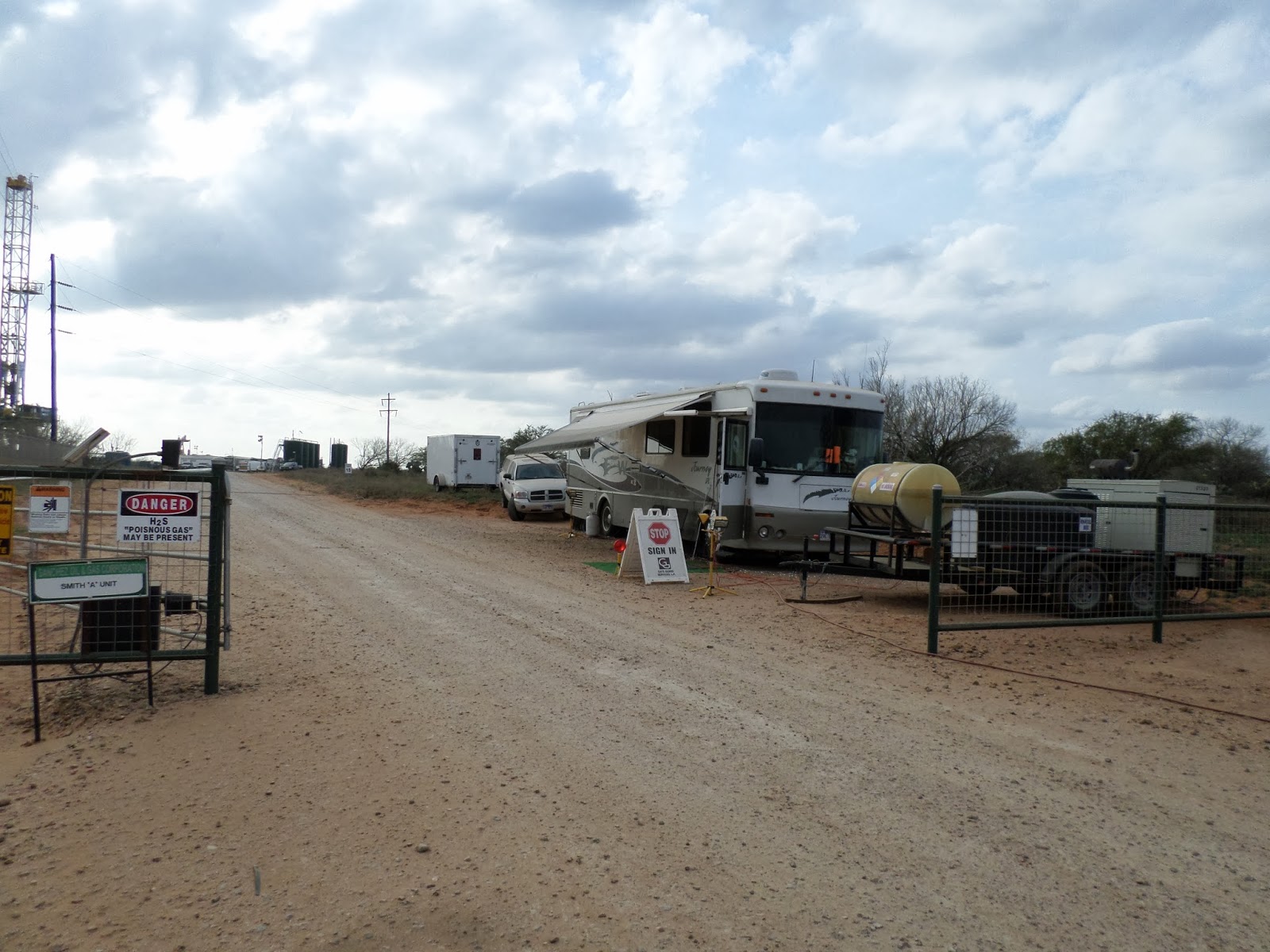 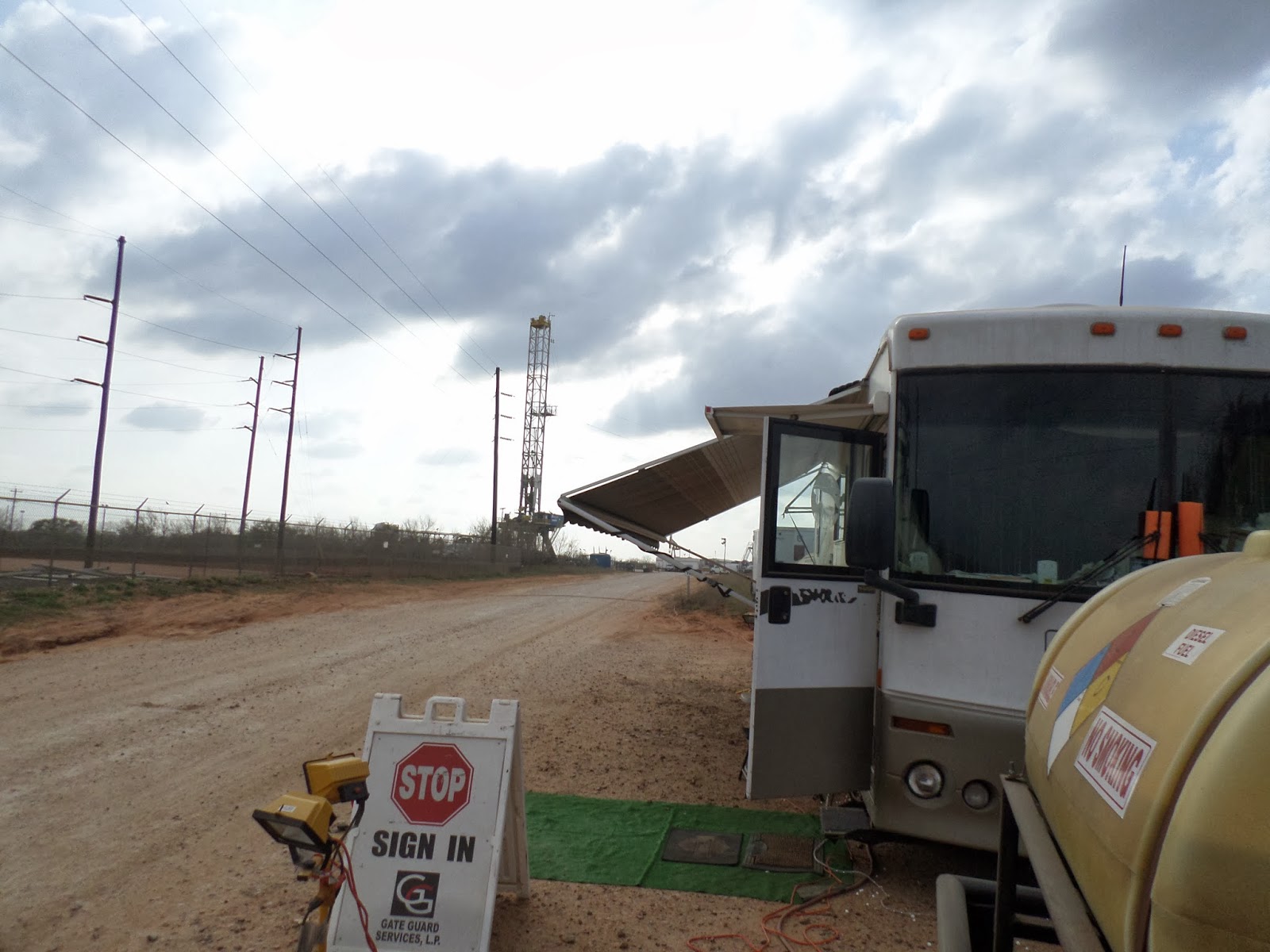 One nice thing is we are really close to town. We are able to jump into the Dakota and make a quick run for groceries and be back at work in a flash. Last year we were on a gate near Valley Wells, Texas. The road to our pad was 1/2 mile of craters and pot holes that you had to navigate really slow or risk substantial damage to your vehicle. We were also 20 miles away from the nearest grocery store. We like this site much better. :-)

Last year we established our domicile in South Dakota, mostly because it was convenient for us since we were spending the summer working at Crazy Horse. Full time RVers can declare most any state as their "home" but some, like Florida, Texas and South Dakota are desirable because of their lack of a state income tax. Each of these states have a large population of full time RVers and are very accommodating to us for the most part.
We, along with everyone else, had no idea how the new Affordable Care Act was going to effect us at that time. We had our own health insurance through a carrier in Indiana and maintained that until we were able to sign up for SD insurance on the government website. We did that in November, selecting a policy (the only one available at that time) that offered "nationwide" coverage. I called the company prior to signing up and explained our lifestyle, residence and our need for a wide network of providers. The customer service agent was very nice and gave me access to their list of providers stating I would have no issues anywhere we were traveling. They took our money for the policy starting in January, shortly after that I got a letter saying I had to provide them of proof that I lived in SD and had a physical presence for a minimum of 9 months per year. I called them and explained our full time RV lifestyle (the same thing I told them in November) and they said they have never and would never insure someone who lived and traveled full time and I would have to have a house in SD or I would be terminated. Needless to say I was not a happy camper. True to their word they terminated our coverage on January 31st so we were back to square one. After a lot of research and several days of discussing things back and forth we decided to switch our domicile from SD to Texas. Blue Cross of Texas welcomes full timers and the Escapees RV Club, which we have been members of for several years, operates a first class mail forwarding service from their headquarters in Livingston, TX. We made contact with the DMV office near our new address and we are in the process of getting our vehicles registered and will be getting our Texas drivers licenses before leaving here in April. We have signed up for health insurance and are getting things back on track. Rudee has spent literally two whole days updating our new address with our banks, pensions, insurance providers and pretty much everyone else that sends us mail. That is one big job! Not to be out done I decided to tackle the job of filing our tax returns. The last couple of years we have paid H&R Block to do the dirty deed. Last year they tripled the price on us and charged us over $500 to do our returns! :-o I decided then and there that I was going to start doing them myself again. I use one of those popular computer programs and it is not too hard but it does take some time. We not only had the federal return but two state returns to complete as well since we worked in Kentucky and had to file for Indiana. The whole ordeal took us 4 1/2 hours but we are happy we got it done for another year.

We got a call from Amazon the other day and had our phone interviews. We accepted their offer of jobs for this fall and will be going back to Campbellsville, Kentucky in October. Right now our plans include staying here and working until the first of April when we will head back to Indiana to spend a couple of weeks visiting. We are due to start at Crazy Horse the first full week of May and will work there through September when we will return to Indiana for another couple of weeks before heading to Amazon. We will be done there no later then December 23rd. This allows us to spend Christmas with our family. We'll kind of play it by ear after that but who knows, we may be back here, at our new home state, eating dust in the oil fields again. :-) I'll keep you posted.
Posted by Phil and Rudee at 12:42 AM

Phil and Rudee
We sold our house in 2009 and moved into our Montana 5th Wheel living and working in Central Indiana, saving for early retirement. That day finally came and in October of 2011 we dropped out of the rat race for a life on the road! In October of 2012 we traded the Montana and Freightliner for a Winnebago Journey motor home. We came off the road in 2014 buying a home in Custer, South Dakota but fast forward to 2020 where we sold the home and the Winnebago. We are now back into a Montana 5th wheel and began traveling and work camping once again.

visited 20 states (40%)
Create your own visited map of The United States or website vertaling duits?